Mina Ashido fanart features the happy and cheerful character of Mina Ashido. Her short and fluffy pink hair and athletic build have inspired her fans to create artwork depicting this cute supporting protagonist from My Home Academia.

Also known as Pinky, Mina Ashido is considered a do-gooder in her Class 1-A at U.A. High School. Her light pink skin tone, courtesy of her Quirk of producing acid, is a prominent feature in the Mina Ashido fanart.

Mina Ashido fanart has various versions of her in cool outfits that are acid-resistant and emphasize her brave character. If you too are keen to produce stunning Mina Ashido fanart, then we have the right collection of inspirations for you!

Glimpse through some of these wonderful fanart creations and get ideas for your next work of art.

What do you think of Ben’s take on Mina Ashido’s camouflage dress? They have made the dress shorter and added feminine elements with frills on the top and sides! Here is a depiction of Mina in the private space of her room looking at herself in the mirror. It reveals the self-assured side of this jovial character. As all Mina fans would know, she’s superb when it comes to shaking a leg. The retro background gives an illusion of movement and adds to the charm of this fanart. What a thrill to see the awesome Mina Ashido in action! The glint in her prominent square eyes is worth looking at. Pinky in a top that says ‘Pink’ posing with a smile is such an adorable look for the MHA character! Do notice the abs sketched by the artist to complement her sporty personality. Although the two don’t interact much in the My Home Academia series, they do share a warm relationship. And that forms the basis of this smiling fanart of the two. We think this is exactly how Mina Ashido would look if she was relaxing in the MHA series. The blown pink gum and hearts in the background give away her kind nature. This fanart is such a close replica of Mina Ashido in her school uniform. The detailing on the hair is so perfectly executed! Although Alien Queen is her rejected hero name, the artist imagines her in that avatar. We think she looks quite cool, don’t you? This Mina Ashido fanart exudes the vivacious energy that Mina’s character in MHA is known for. She seems easygoing and fun in this cute pose created by the artist.

This is how the artist visualizes Mina as a grown-up woman! Check out the cool roller skates and fancy make-up she is carrying. The bright colors and aesthetics of the 90s done by Spaceberrycream seem to suit Mina’s personality! This extra colorful version seems like a good change from her usual purple and turquoise body suit.

We all know Mina Ashido as the happy-go-lucky character in MHA, but she has a strict side when teaching dance moves to her friends. This fanart  perhaps captures one such moment. Ever wondered how the My Hero Academia characters would look in each other’s uniforms? Here is Mina Ashido in Mirko’s bunny dress and we think she rocks the look! Pink and purple are always so funky together! Mina’s pink hair and skin against the pretty purple backdrop is such a cute version. Mina welcoming the New Year is the theme for this fanart. The signature popping horn has been retained while the hair and facial features have been made softer and more sensuous. This art looks like Mina Ashido from MHA met Betty from the Archies comics, right? The retro polka dot top and matching stilettoes are definitely what Mina the fashionista would love. Drawing MHA characters can be quite tricky, but this detailed tutorial will definitely make things simpler. It guides you through the proportions as well as drawing the facial features accurately. Follow it and get absolutely on-point fanart!

True fans take their fandom a step further by sporting their favorite character’s merchandise. Here are a few options for all the Mina Ashido fans reading this.

Pink is her color, and pink are these shoes! Get your hands on these absolutely truly Mina slip-on shoes to celebrate the character. 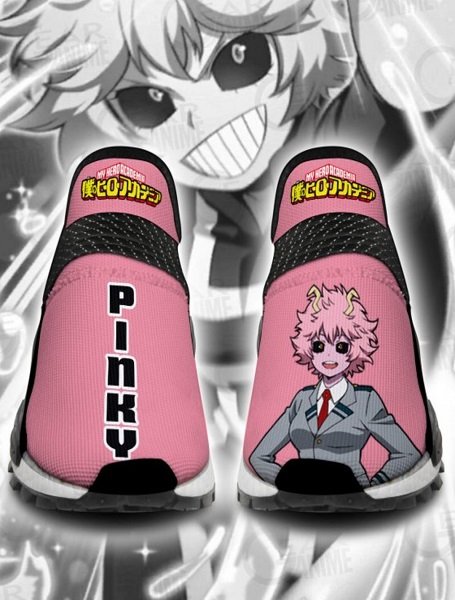 Feel like a part of the Academy with this sporty t-shirt. It features Mina’s surname and her Quirk along with a silhouette of her face. 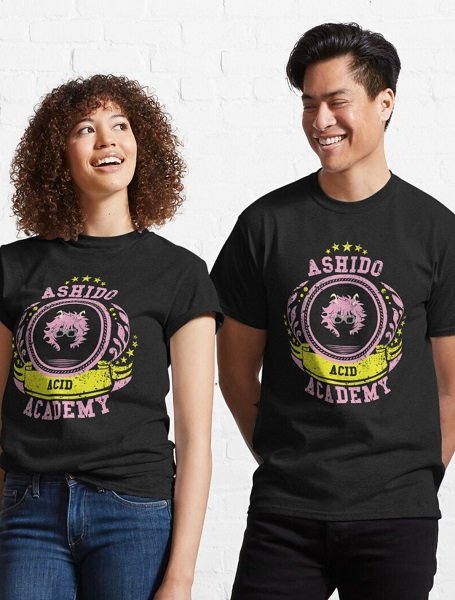 A cuddly Mina Ashido that can be displayed on your table or be used as a keychain! Given the small size, it is easy to carry anywhere. 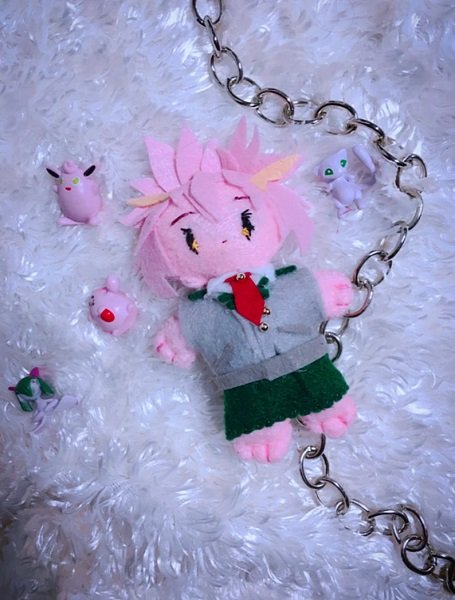 No, Mina’s weakness is that she can only use her Quirk for a limited amount of time. Prolonged use of her power will result in her own skin getting burnt due to the acid.

Are Denki and Mina friends?

Yes, Denki and Mina are often seen together in the series. They have been partners in the exam preceding the training camp and bond well together.

Mina’s Quirk of producing acid affects the pigment of her skin making giving it a pinkish complexion.

Mina Ashido has a fun and lively personality. So, her fanart allows you the opportunity to experiment with colors and styles to create unique artwork.

With her popularity catching up gradually Mina is becoming a much-loved character and gaining a huge fan following. We hope the above curation of Mina Ashido fanart comes in handy as an inspiration when making your next creation.